I have now started hosting my pages completely by myself. I left an .htaccess file at the old address (dataportalen.com/pho/) which will happily redirect people here until dataportalen is closed for good. I want to thank Alf Otto for hosting my pages all this time.

Ever since I started hosting my pages on my own machine, I have been pretty lazy about mentioning small updates and fixes here and there in my news posts. You see, back when I had to upload files to my host's server in order to view the results, I used to append a 2 to my files (like foo2.php) and work with that until I was happy with the result. Then I'd delete the 2 version and upload the real version. This means that when I did an update, changes had been accumulating over time and the change was rather big. Nowadays when I add and fix stuff, it's visible immediately after saving the file, so I feel that because the updates have already been there for some time, it's kind of old news and doesn't deserve to be mentioned. Oh, I'm wrong, of course, but feelings aren't always rational. So, in recognition of and in apology for this, allow me to present some StarCraft quotes. Also, a few new books have appeared in my book list. Yes, that table is created manually, and yes, that should really be pulled from a database and assembled properly afterward.

My job at Amnesty International, Rogaland division is now official! I was in for an interview about one and a half month ago, and while Atle Espedal (my boss) said the job was more or less mine except in writing, I didn't want to mention anything in case nothing came of it. I will start on July 4 and will work there for 14 months. I look forward to starting.

I've been watching a lot of Coupling together with Even lately. Coupling is so funny! My favorite character is Jeff, but Jane comes pretty close at times. I've also started watching anime, and the first series I'm churning through is called Angelic Layer. It's pretty cool, though I think I need to watch more anime to really get the gist of it. Some of the stuff those crazy characters do is just plain weird.

I got around to watching I, Robot. It's something special watching the stuff you've previously imagined in your head come to life on the screen. For instance, Alfred Lanning was more or less the same as I imagined him, though I imagined him to be chubby, not skinny. I also imagined Susan Calvin to be a little older than she is. The CGI in the movie is superbly done, Sonny is an awesome robot, and I really like the design of the NS-5s. Overall it's a very good movie, but there was one thing I didn't quite like. Unfortunately I can't tell you what it is, because that will basically spoil the movie for you. Suffice to say that something interpreted something in something's own way, and as a result, some other things started doing this-and-that. The problem isn't that the other things started doing so-and-so, but rather that something was behind it and not the other thing, which is usually the case in Asimov's novels when the other things start doing stuff. Also, the movie lacks a surprising and breath-taking ending, which Asimov's novels tend to have. Hmmm... I hope they make a movie based on Elijah Baley and Daneel Olivaw in the future.

I am now a russ, apparently. I will wear my russ clothing and hand out my russ cards, but damn it, I refuse to participate in silly activities such as throwing rotten eggs at other russ (and potentially hitting innocents), kidnapping, and getting senselessly drunk. In fact, I will not get drunk at all, as I'm a teetotaler. You will also be glad to know that I do not intend to be a nuisance to students younger than me; I was soaked in water in my first year by russ, and that was not very pleasant. In case you're curious, here's my russ card: 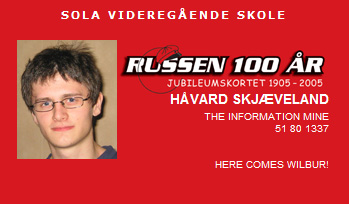