A lot of things have been happening since my last news post.

I have bought a ton of books, but have only read two of them: The Player of Games and Foundation's Edge. As for the ones I've bought, they're in the Books that I want to read section, indicated by their parenthesized status.

Go read Chugworth Academy. It's on the Links page together with a new image of Faye, the new Games section, and the new Art section.

Fahrenheit is an excellent game, so much so that Even and I pulled an all-nighter to finish it. Speaking of Even: He and I are maybe — maybe — going to make a web comic. But don't hold your breath. If it becomes reality, Even will draw it and I will write it. I've read enough web comics to know what makes them good, I consider myself a competent writer, and Even's getting better and better at his drawing. I think we can pull it off.

I finally survived P8107, and here is the proof: 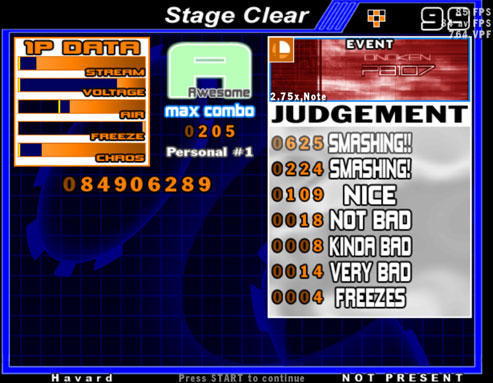 You wouldn't believe how much more easier it is to play StepMania when you've mastered the Art of Two Hands. Suddenly you're able to obliterate arrows almost twice as fast, but your brain also has twice the number of fingers to control.

As an avid gamer I feel it is my responsibility to write something witty and degrading about Jack Thompson, but I think everyone else has already done that more than sufficiently. So just let it go on record that the sooner everyone recognizes him as the lying, misleading, fear-spreading, unpleasant lunatic that he is, the better.

Yes, I should really do more site-related work. I'll be getting to that next, I promise.