So Max Payne 2 is very very cool. First of all, it kept all that was good from Max Payne 1, enhanced some features that needed enhancing, and added a bunch of stuff seamlessly into the gameplay. Truly a worthy sequel.

The most notable new feature in this game is the physics engine. When I first fired up the game I wasn't aware that there even was a physics system; imagine my surprise when I sent the first enemy flying into a pile of boxes, shelves, mops, buckets and whatnot ^-^. The ragdolls are a bit easy to send sky high, but it's definitely not as bad as in the DX:IW demo.

The bullet time system differs from Max Payne 1 in two respects (or three, if you count the post-processing effects). The only way to accumulate bullet time in Max Payne 1 was to kill enemies; in Max Payne 2, the bullet time meter fills up automatically, as well as getting bumped up a certain amount when you kill enemies. The more enemies you kill, the more yellow the bullet time meter gets, while constantly going towards white again. The more yellow it is, the slower time moves, giving you the upper hand. When it's maxed out yellow and you reload, time slows down even further and Max does a low 360 degree spin counter-clockwise while the camera does a 360 degree spin clockwise with the focus on Max. It looks extremely cool, and it is, in fact, a pretty effective way to dodge bullets. Here's a clickable picture: 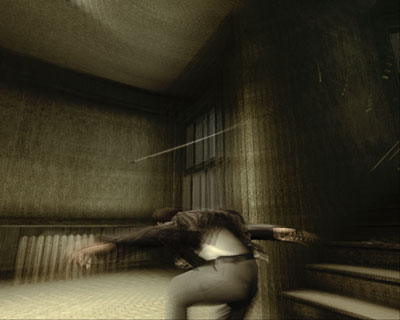 When the last enemy in a certain group dies, the camera does a triumphant slowmotion move around the enemy; on special occasions, the camera moves on a fixed path. This is one of the good things they kept from Max Payne 1. On rare occasions does the camera move in an unorderly fashion (such as sticking very close to walls or clipping through stuff), but that's unavoidable.

The enemies' banter is still funny as hell; the obvious connection between 'Max' the name and 'maximum' the word and 'Payne' the name and 'pain' the word is still being exploited, though not as extensively as in Max Payne 1.

Though the enemies are easy to gun down (and pretty clumsy with grenades), they surprised me at one point in the game. They'd dressed up a mop with the generic dress that they wear and surrounded it with explosives. Trigger-happy as I am, I bursted into the room, guns blazing, only to realize my mistake too late; I was blown to bits. Here's a picture of Mr Mopman: 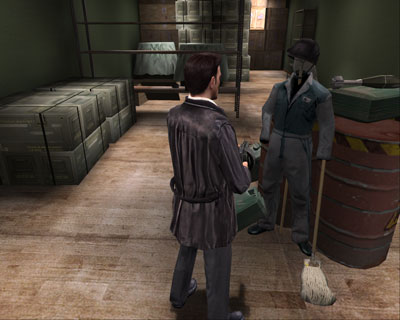 There are now episodic TV shows showing one episode on virtually every TV screen you see. Among others, Lords and Ladies is back. Another TV show, called Dick Justice, directly parodies Max Payne. Remember the utterly unsuitable grimace on Payne's face in MP1? Justice does a parody on it.

Payne's nightmares are finally not annoying. In MP1 you had to walk along floating labyrinth-ish blood paths with the risk of falling to your death; in MP2's nightmares, you can't die. Neither do you have to do repetitive and useless running around. If you pay attention, Max' dreams subtly reflects some of the various things he's seen throughout the game (such as TV shows, people talking etc.). Also, the dreams contain several weirdities, like this one (it's hard to tell from the picture, but there are post-processing effects being done here): 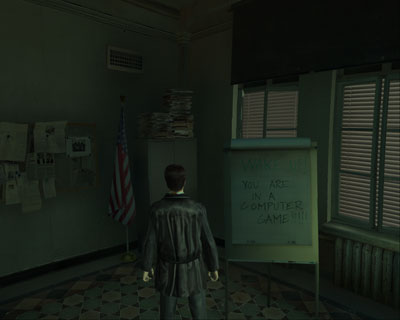 The story is still communicated by watercolor pictures and speech bubbles, which is another nice (or rather, essential) port from MP1. (Admit it: It wouldn't be Max Payne without the watercolors.)

If you finish the game on the Dead on Arrival difficulty setting, you get an alternative ending. See, now you just have to try it.