I realize that my site features a depressingly low amount of pictures, and while content is all yummy and such, I figure that a few pictures every now and then won't hurt. For instance, take a look at my neighborhood: 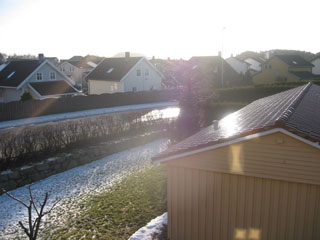 It's cold and icy, which means I'm freezing my butt off and can't do parkour, respectively. Here, check out my workstation: 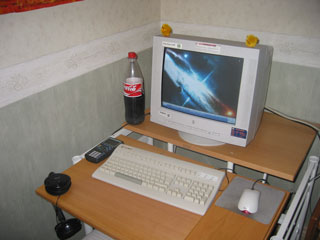 To the left of my keyboard is my TI-83 Plus graphical calculator, which I wish were a TI-83 Plus Silver Edition (the former has a processor running at 6 MHz while the latter's runs at 15, making the rendering of graphs so much faster). To the left of my monitor is a bottle of Coca-Cola, which I really should be drinking less of. On top of my monitor are Elijah and Daneel, my two magical easter chicks who make sure that Fisher doesn't sneak up behind me and captures me while I'm consumed in my work, and who make sure that the gnomes residing in the walls of my house don't come out from the power outlets during the night and infiltrate my CAT-5 cable's RJ45 plugs, thus ensuring my computer its incessant connection to the Internet. No, it's true!

I've almost completely rewritten the About Me page, and it's now in a state which almost doesn't make me ashamed of who I am.

It's amazing to read Asimov's robot stories, because a lot of the events in them revolve around the Three Laws and the consequences thereof. In a particularly funny scene in The Caves of Steel, a character tries to strike a robot (whom it is very hard to distingush from a normal human being) in the face, and only partially succeeds; the robot moves backward, but doesn't entirely manage to dodge the attack. After that, the robot says That was a dangerous action, Francis. Had I not moved backward, you might easily have damaged your hand. As it is, I regret that I must have caused you pain.

I am (unfortunately?) becoming ridiculously good at StepMania.