Doodles! (Now dead, replaced by Llamaphobia.) I plan to post small doodles every Monday and every Friday, without fail. I'm not at all inspired by xkcd. No, sir!

I read a Dawkins essay called The Real Romance in the Stars, and a quote struck me:

"Note, accordingly, how little it means to say something like 'Uranus moves into Aquarius'. Aquarius is a miscellaneous set of stars all at different distances from us, which have no connection with each other except that they constitute a (meaningless) pattern when seen from a certain (not particularly special) place in the galaxy (here). A constellation is not an entity at all, not the kind of thing that Uranus, or anything else, can sensibly be said to 'move into'."

And indeed, it can't "move into Aquarius." Using the power of modern computers and a mountain of astronomical data, I have put together a little demonstration with the awesome program Celestia (I recommend you check out the effect for yourself in real-time 3D). Here is Uranus as viewed 100 kilometers from its surface. One can just make out the Aquarius constellation. (Click for larger versions.) 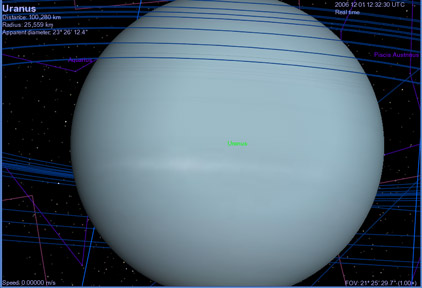 Zooming out to about a million kilometers, one can see the orbits of Uranus' many satellites. 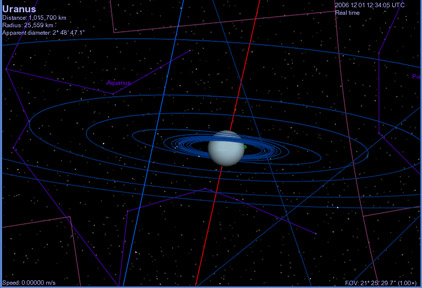 At one astronomical unit (the distance between the Earth and the Sun) above the surface, the orbits of all its 27 satellites are visible. Some of the stars in the Aquarius constellation are visible. 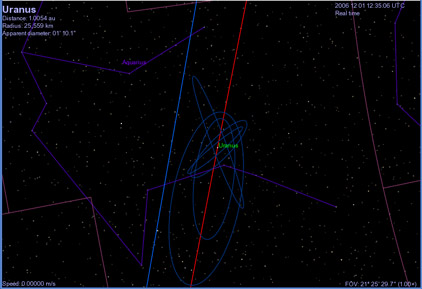 At 120 AUs, the whole Solar System is visible, and Uranus' orbit is highlighted in red. 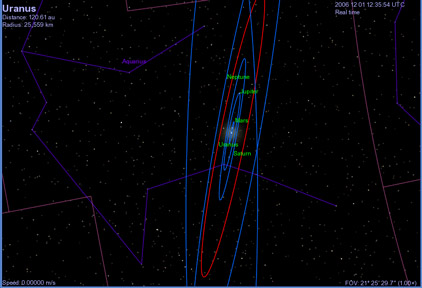 At one light year away from Uranus, our sun is still visible, but its planets are not.

At 50 light years out, we see the sphere that Celestia uses to draw constellation borders. It's completely irrelevant now, of course, so the next picture will have it removed. 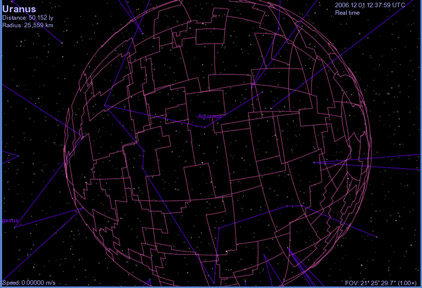 At 300 light years out, the illusion of a constellation as a coherent entity completely breaks down, and one is left with imaginary (and ultimately meaningless) lines connecting the stars. 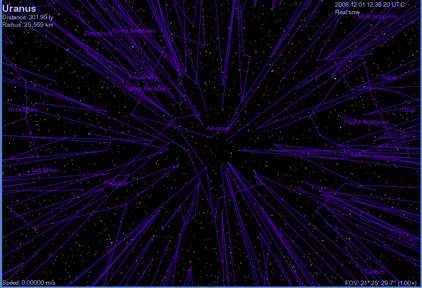 What can you learn from this? "Astrology is bunk" is a good lesson. "The charlatans who steal weak-minded people's money using astrology are fools" is another good lesson. Again, the effect is much better seen in real-time 3D. Go download Celestia.