A collection of short stories woven together into a coherent whole. The stories concern Mars, and humanity's efforts to colonize it.

I really enjoyed all the "chapters" (short stories), but "Usher II" really stood out, being an homage to E. A. Poe. Definitely recommended. 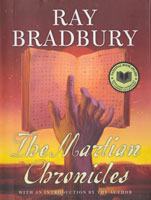