A follow-up to the previous post, in this post I want to write about the experiment we did at the hotel in Switzerland (at \(430m\) above sea level), and then at the top of Aiguille du Midi in France (at \(3777m\)). The experiment involved a pretty big piece of styrofoam. The reason for choosing this as our material, you might have guessed, is because styrofoam has a very low density. That is, its volume is very big while its mass is very low. Now, the question is this: Will it weigh more, less, or the same at both altitudes?

If you want to ponder this yourself, don't read on! Explanation and solution follow.

You might be thinking that it will weigh less because it is farther from the Earth, and that would be true if gravity was the only force acting on the object, but there's also buoyancy to consider. The density of the air is significantly less at those altitudes than at around sea level (walking up a single flight of stairs can make you short-winded), while the difference in gravity you feel on your body is not at all noticeable. So imagine that the piece of styrofoam is floating on water. The reason it floats is because the water is pretty dense. Now, as the density of the water is reduced, the piece of styrofoam will sink more and more, and when the density is as low as the air at sea level, it will have "sunk" a bit more. Now, imagine reducing the density even more, to the density level at the top of, say, Aiguille du Midi. The styrofoam will "sink" more into the atmoshpere, thus registering a higher weight on a scale! Presumably. If the force of buoyancy more than cancels out the effect of the reduced gravity. And will this be measurable?

For these values of air density, I simply pulled them from The Engineering ToolBox's page about U.S. Standard Atmosphere, plonked them into GeoGebra, ran a 9th degree polynomial regression analysis on them, got a function expression (just a bunch of polynomials with really, really, really small coefficients), and did \(f(430)\) and \(f(3777)\). 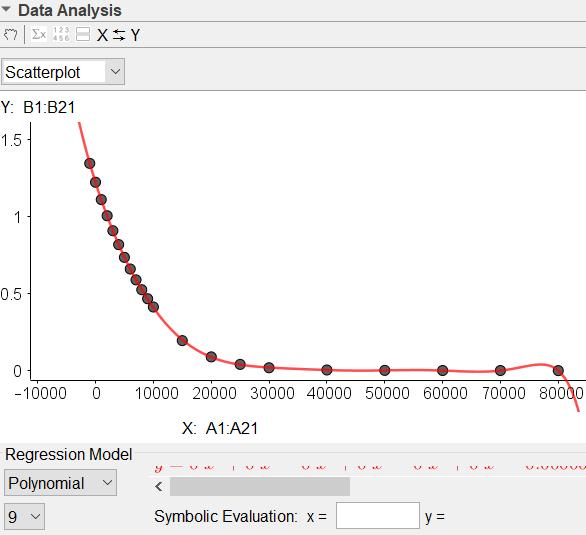 I am nothing if not thorough! Look at that expression! I have GeoGebra set to display the maximum amount of decimal places, 15, which isn't enough! Ridiculous...

See, I know how to show my work!

In other good news, since the beginning of February I've been working part time for Ent3r Realfagstrening, going to three different schools on Mondays, Wednesdays, and Thursdays, helping younger students with math and physics homework! It's very fun, and it's excellent training for me. Between my own school work and my part time job, I feel massively busy, but not so busy that I can't crank out an update now and again.