I'm a 37 year old man from Norway. I'm into computers, web technology, games, rational discussions, literature, and All Things Shiny. I'm a strong atheist who hates moral relativism (what are the odds). I love competence, I hate incompetence, and my MO is Crocker's Rules, although I consider it applicable only within the realm of civilized discussion. I'm a verbophile and a hobby etymologist. Various ways of contacting me exist.

I'm currently (since 2018) enrolled in a five year course called LUR, Lektorutdanning Realfag (science teacher) at USN (Universitetet i Sør-Øst Norge, The University of South-Eastern Norway) in Kongsberg, at the end of which I will work as a teacher.

Online, I go by Hermiene. It's an old German female name that I really like the sound of (sorry, it's not a Harry Potter reference). Things were messy before. When I first learned of the concept of online handles, I chose Fenix, which was a reference to a hero character of the Protoss race in the computer game StarCraft. Later, I changed it to Phoenix because it sounded cooler (it was never a conscious reference to the mythological bird as it was only later I learned about it). Later still, when I discovered that Phoenix was an over-used handle, I shortened it to Pho. I never really liked Pho, so I eventually changed it to Havard, which resembles my real name. This was ok, but I wanted something that was not so close to my real name, which is why I now go by Hermiene.

So there's the whole messy story of my online handle.

I look like your typical nerd, I suppose, in that the typical nerd usually doesn't care what he looks like, as long as he looks acceptable (or alternatively, doesn't look repulsive). My hair is black and I like to keep it short, I wear glasses, and I'm slightly thinner than I'd like to be (though I'm in good shape). I have facial hair, but I like to shave. I like t-shirts and loose pants; I loathe tight-fitting clothes. Here's an image: 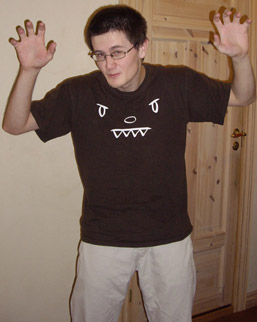 I'm a little wary when it comes to politics because I'm not politically active, and I have no illusions about being knowledgable about the subject. I also find a lot of political discussions quickly devolving into shoutfests, with no intellectual merit or opportunities for learning, which is demotivating. However, I do have opinions. I like to discuss issues rather than labeling myself as something. As a general rule, I don't particularly care about what people do to their lives and to those immediately around them, as long as it's voluntary and not harmful to others than themselves. This means that I accept things like homosexuality, and deplore things like tobacco smoking (except where such activity only harms the perpetrator).

I try my best to base my opinions on rational thinking and scientific findings, and I will often state things rather bluntly than cover them in pretty words. (Euphemisms are evil. People are handicapped, not physically challenged. People die, they don't pass away. Shit hits the fan, fecal matter doesn't hit the bladed electrical oscillating contraption.) Packaging simple concepts in complex words is counter-productive, and it stifles honest discussion.

I don't consider hurting people's feelings or disrespecting their beliefs to be an evil thing. If you are wrong, you need to be told that. As an example, if you are a young Earth creationist (you believe the Earth to be around 6000 years old and all species on it created as they are now and that they don't change), you are wrong. If your feelings are hurt, that's your problem, not anyone else's, and you shouldn't be unduly surprised when you run into people who try to refute you.

In a similar vein, I don't consider respect to be a human right. Respect should be earned through achievement and recognition; it should not be automatic. (If it were, then what's the point of respect?) Dignity, however, should be shown to anyone capable of civilized discussion. It seems to me that an awful lot of people think their views should automatically be respected, as if somehow their humanity is lessened if their feelings are hurt. The key insight is that respect is not the same as dignity.

Here are some of the opinions I hold:

Pascal's Wager is the contention that since one doesn't know whether God exists or not, one would be wise to bet that He does, and thus believe in order to avoid eternal damnation. There are several problems with this. One is that you'd better hope that you believe in the correct one, given that humanity has traditionally believed in so many gods. Another is that even if God exists, how do we know that He'd value belief for belief's sake, rather than disbelief from honest examination of the question? I.e., how do we know that the honest atheist will be sent to Hell while the faith-based theist will be sent to Heaven, especially when one of the characters of God is supposed to be omni-benevolence? This scare tactic doesn't work on me, and shouldn't work on anyone who values reason. When people threaten me with hellfire to make me convert, it honestly feels as if a crazy person threatens to hit me with an invisible bat, mimicking the motions of preparing the bat for hitting. I don't blink an eye.

For this reason and many others, I'm an atheist. By this I don't mean I know that God doesn't exist. (How can any reasonable person say they know anything doesn't exist?) My atheism describes the state of my belief on the question of gods, not its strength. If you want to be precise, I'm an agnostic atheist, but that's a formality. I'm an atheist, neither more nor less, and I'm perfectly happy with it.

As for so-called spirituality, I think a few words on this subject is appropriate. I don't really understand what people mean when they say they're spiritual, but usually it turns out to mean nothing more than appreciation of existence, or art, or beauty, and it feels silly to have to defend against the (implicit) claim that atheists lack these things. I love nothing more than to sit at the top of a mountain and watch the sunrise, or admire paintings, or get lost in a good book, or listen to absorbing music. People who think that atheists live lives deprived of these things are at best deluded and at worst crazy, and I don't know which is worse.