This page collects stuff I want to show others, but which I don't feel deserve a page of its own. As the name implies, here is where I offload random stuff. If something here grows to insane proportions, I will most likely give it its own page.

These are items that get their own page for various reasons. Why the heading name Fun? Firstly because it's true, and secondly because I can't come up with a better name; it does not imply that this is the only fun part of my site.

mathschallenge.net's Project Euler is a set of mathematical problems that are designed to be solved with computer programming. It's very fun and challenging, and I think it's a great way to hone your programming skills. Here's a list of the problems I've solved so far:

Xbox Live Arcade is a very neat feature of the Xbox 360; it's a convenient way for game creators to get small, arcade-like games out, and it's great to have every one of these games in one box. I use this feature excessively. In fact, I own many more XBL Arcade games than I do normal ones. Some of these I'm very good at, and this section is a way for me to brag about my high scores. Remember, every game has its own online leaderboard, so I can't effectively lie here.

These are my records in the 2D computer game Elasto Mania. They're not so good, but I believe they're above average.

I'm fairly good at Minesweeper. Here are my records, accompanied by recordings:

Here's a list of my favorite fictional heroes. The ranking is tentative; evaluating the coolness of each against each other is hard.

I found the title of Iain M. Banks' book The Player of Games hilarious, so I invented some others: 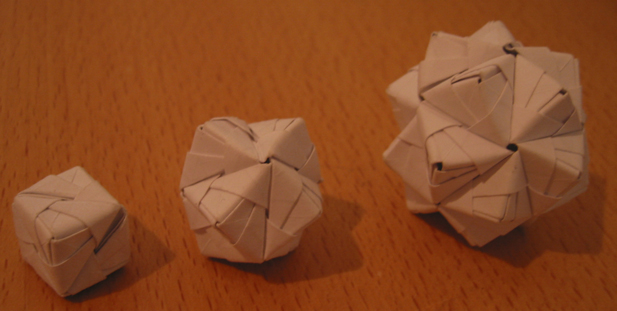 I made these shapes following the instructions on Stephan T. Lavavej's Origami Polyhedra page. From left to right: a cube, an octahedron and an icosahedron. I'm still in the process of making the stellated truncated icosahedron (a.k.a. Epcot ball), but it requires 270 pieces, so it'll take some time.

Do you have any items you think I would like to play/watch? Tell me.

Here's a list of words I think are cool, in the order that I think of them (or discover them), with a definition from dictionary.com following each one.